This is the first article in a series, to read the whole series go here.

You’ve heard about it, every child will have a portable computer, small enough to carry in her bookbag. Its software will be an open environment that they can change and program themselves. I’m talking, of course, about the Dynabook, from Alan Kay’s proposal in 1972. The programming language that was to be the center of the Dynabook and its environment was Smalltalk, one of the first object oriented programming languages. Smalltalk was intended to be easy for children to learn, to that end has a simple and highly regular syntax and a deeply interactive environment.

Dynabook was an idea before its time. It lives on in spirit in the OLPC project, which also contains Smalltalk, or an application of it in the form of Squeak’s EToys.

Modernly Smalltalk has a number of implementations. One of the best known is Squeak which Alan Kay continues to be involved with. Squeak is an wonderful programmer’s playground where Kay and his team have tried out a multitude of ideas, still with the goal of creating an environment that children may learn in. Unfortunately for the working programmer the playground has become rather cluttered with toys, so the Pharo team has made a stripped down version for a much leaner programming environment.

As I alluded to above, Smalltalk isn’t just a programming language, it’s an environment in its own right. When you open up the Pharo image you have an entire integrated development system, including the System Browser where you do most of your coding, the debugger and the unit test system. And all of which is written in Smalltalk and can be modified inside the system in real time.

When this article is complete:

To install Pharo, start by downloading the zip of latest version from Pharo Downloads. You’ll have the choice between the Cog and Standard VM. Cog is newer and faster, which won’t matter much for our purposes, but why not get the fancier toy when you can?

Unzip “Pharo.app” to the location you want to keep it, “Program Files” will do the job. Once you’ve unzipped it, navigate into the Pharo.app directory and double click the “Pharo” link and your new Pharo system will open.

A Brief Tour of the Environment

Smalltalk was designed to be an entire environment, separate from whatever system that it’s running on. The advantage is it gives you a completely portable programming environment that you can move to any machine that has a Smalltalk VM and it will work the same way on each of them. A disadvantage is that there’s a lot to get used to in it. For the next couple of weeks, 90% of the work is going to be in the System Browser with side trips in a few of the other tools. The major components of it are: 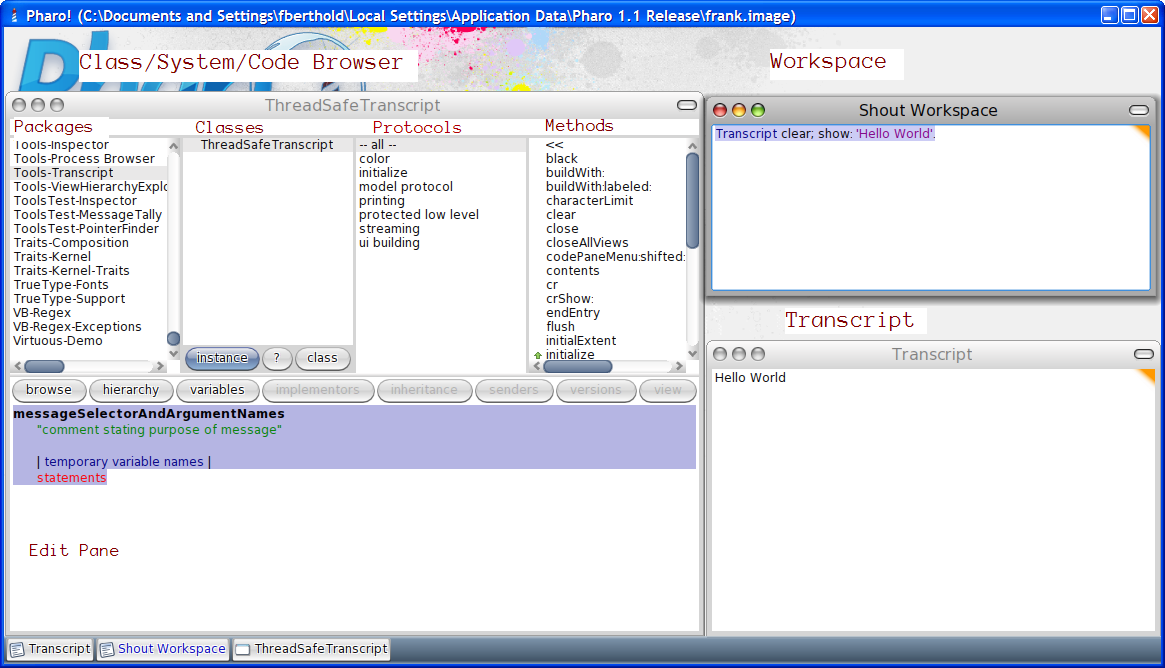 Files Used in this Project

To import “Virtuous-Demo.st” into your Smalltalk image:

You can verify that the package has been correctly installed by doing the following:

To keep it as part of the image (along with any other changes) click “Save” in the World menu or to exit click “Save and quit”.

To execute code in Pharo:

In the Workspace window enter the following code:

There are two ways to run the code. You can either right-click on the same line as the code and select “do it” or fellow keyboard addicts can type Alt-d while the cursor is on the same line as the code. In either case the words “Hello World” will then appear in the Transcript followed by a new-line. You might also see some paired numbers that come up during the process, this is a side effect of the Transcript being where logging data for the system in general is sent.

Understanding the code you just Executed

One element at a time:

The first step you’ll take in your Smalltalk project is to add it to the Packages pane of the System Browser window. To do this:

Now that you’ve added your category, select it from the Packages pane, notice that in the Edit Pane there’s a template for creating a class:

Now you can see the new class in the Classes pane. In the Protocols pane click “as yet unclassified”, this is a generic bucket for any methods you write without sorting them. Now you can see a template for a method in the Edit pane:

Start writing your method, since there’s going to be no need to track temporary data within an object I made this a “class” rather than “instance” method, so click the “class” button underneath the class pane. Now change the Edit pane like so:

The first line is the method name, followed by a comment. I removed the | temporary variable names| because there was no need for them, and put the actual action of the method in the last line.

When you’ve finished entering the method “accept” it the same way you did with the class. When you “accept” a new method for the first time, it will ask you to enter your full name. Smalltalk automatically tracks all changes to the system and it will uses each individual’s name to track who has made the changes.

To try your new method out, type Greeter sayHello. into the Workspace and then execute it.

To get an idea of how arguments, I wrote a version of sayHello that knows who it’s talking to. To add another method click “as yet unclassified” in the Protocols pane again and the Edit pane will be populated with the template again, add the method sayHello: as below:

Inside the method declaration is the argument list. To indicate that a method has an argument append a : to it and follow it with the argument name. In the body of the method there’s one more bit of Smalltalk syntax the , operator concatenates two strings. Strictly speaking it’s not Smalltalk syntax, but just an operator attached to the String class. I’ll get into the details of operator declaration in a later article.

Nice things about Smalltalk so far:

Next week I’ll be putting together a class for calculating the “FizzBuzz” problem and unit test it using Pharo’s integrated unit test system.